KNIGHTS OF THE SKIES 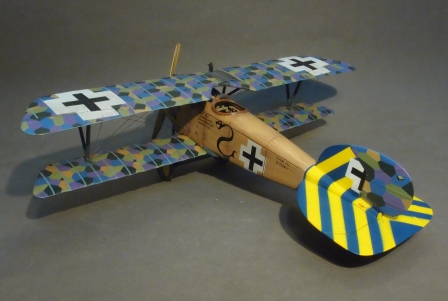 Another colourful Albatross from Jasta 46.
The Albatros D.III was a biplane fighter aircraft
used by the Imperial German Army Air Service
(Luftstreitkräfte) during World War I.
It was the pre-eminent fighter during the period of
German aerial dominance known as "Bloody April" 1917.

Early D.IIIs featured a radiator in the center of the upper wing,
where it tended to scald the pilot if punctured.
From the 290th D.III onward,
the radiator was offset to the right,
on production machines while others were soon
moved to the right as a field modification.
Aircraft deployed in Palestine used two wing radiators,
to cope with the warmer climate.

Von Richthofen and most other German aces won
the majority of their victories on the D.III,
and it even turned out to be more successful than its alleged successor,
and continued in production for several months
after the introduction of the D.V.

Peak service was in November 1917,
with 446 aircraft on the Western Front.
1,866 Albatros D.III planes were produced.

The D.III did not disappear with the end of production, however.
It remained in frontline service well into 1918.

As late as March 1918, there were still
nearly 200 D.IIIs in service on the Western Front,
eight months even after the introduction of its successor.

Royal Prussian Jagdstaffel 46 was a "hunting group" (i.e., fighter squadron)
of the Luftstreitkräfte, the air arm of the Imperial German Army during World War I.
As one of the original German fighter squadrons,
the unit would score 20 confirmed aerial victories over enemy observation balloons,
plus thirty more over enemy aircraft.
The Jasta paid a price of ten killed in action,
one lost in a flying accident, six wounded in action,
and three injured in accidents.

This plane was possibly flown by Leutnant Helmut Steinbrecher
was the first pilot in history to successfully parachute
from a stricken airplane, on 27 June 1918.
He was a World War I flying ace credited with five aerial victories.
Although Steinbrecher was flying a different aircraft at the time,
an Albatross DV or a Pfalz D.III which
was hit by British flying ace Captain Edward Barfoot Drake,
209 Squadron Royal Air Force in his Sopwith Camel over Warfusée.
Captain Drake was just 20 years old,
from Goodwick in Pembrokeshire, and himself was reported missing in action,
presumed killed, just two months later on 29 September 1918.

The WW1 German lozenge patterns are some of the most interesting
and distinctive camouflage schemes ever devised.

During the early stages of the Great War,
the Germans were looking for a way to effectively
camouflage the aircraft of the Luftstreitkräfte
to inhibit enemy observation of the aircraft
while it was in the air as well as when at rest on the ground.
Large, irregular blotches with two or three colors
were used on the upper surfaces of the wing
which led to the development of the Buntfarbenanstrich,
the lozenge camouflage made up of repeating patterns of
irregularly shaped four-, five- or six-sided polygons.
Because painting such a pattern was very time consuming,
and the paint added considerably to the weight of the aircraft,
the patterns were printed on fabric,
and the fabric was then used to cover the aircraft.
This printed fabric was used in various forms
and colors from late 1916 until the end of the war.

Lozenge camouflage was a German military camouflage scheme
in the form of patterned cloth or painted designs,
used by some aircraft in the last two years of World War I.
It takes its name from the repeated polygon shapes incorporated in the designs,
many of which resembled lozenges.

In Germany it was called Buntfarbenaufdruck (multi-colored print)
but this designation includes other camouflage designs
such as Splittermuster and Leibermuster,
and does not include hand-painted camouflage.