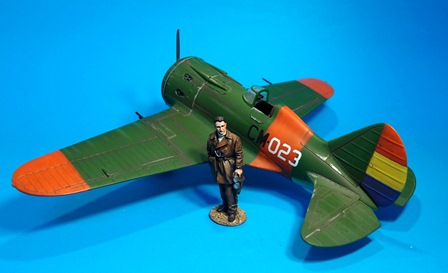 On May 3, 1937, Tinker was assigned to 1st Escuadrilla de Moscas,
commanded by the Russian, Ivan Lakyeyev,
flying the faster Polikarpov I-16 "Mosca" monoplane fighters.

On June 2 and June 16, he shot down another CR.32. On July 13,
he became the first pilot to shoot down one of the most modern German fighters,
a Messerschmitt Bf 109A, near Madrid. On July 17, Tinker shot down another Bf 109A.
This first version of the Bf 109 was not a "good climber" and Tinker caught it from behind while
the German pilot tried to gain altitude after a dive on him - a lethal mistake according to Tinker.
The scene is described in detail in his book Some Still Live.
His final victory was over a Fiat CR.32 on July 18, 1937.
Tinker flew his last missions on July 29, 1937, then returned to the US.

The Polikarpov I-16 was a Soviet fighter aircraft of revolutionary design;
it was the world's first low-wing cantilever monoplane fighter with retractable landing gear
to have attained operational status and as such introduced a new vogue in fighter design.
The I-16 was introduced in the mid-1930s and formed the backbone of
the Soviet Air Force at the beginning of World War II.

The diminutive fighter, nicknamed "Ishak"("donkey") by Soviet pilots,
and in the Spanish Civil War it was called the Rata ("rat")
by the Nationalists or Mosca ("fly") by the Republicans. 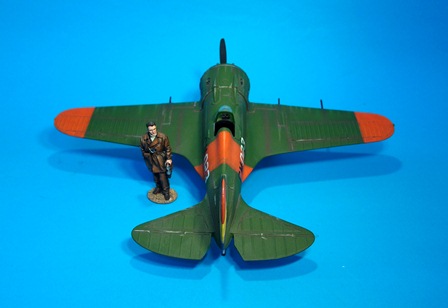 The two main aircraft
that were pitted against each other in this conflict,
were the Polikarpov I-16 and the Messerchmitt BF109.
Both were the most advanced fighters available to each side at the time.,
and both were to play significant roles later in WW2.

The Republican I-16 was heavily influenced by
the American Bee Gee racing monoplanes of the early 1930¡¦s.
The I-16 when it came up against the BF109,
could out turn and match the BF109 in a conventional turning fight.
To counter this , the Germans used the BF109¡¦s superior performance at altitude,
and developed tactics that used aircraft in closely coupled pairs.
This innovation meant that the lead 109 could focus on making an attack knowing his rear was covered,
and if one of the pair of 109¡¦s was attacked, both would break in the same direction.
If the attacking aircraft continued the pursuit in a turn,
the free 109 would have every opportunity to get on the attackers tail.
These tactics were later to be used to great effect in the Battle of Britain.

The Polikarpov I-16 was a small, powerful, agile, but unstable plane ,
and designed to be flown by pilots who were expected to fight as individuals.

The BF109 was a high altitude interceptor, designed for speed and its climbing abilities.
It was well served making diving attacks in tightly disciplined pairs.
The effects of these advantages and disadvantages, was basically a stalemate.


We now accept PAYPAL,
to purchase your figures please send your order by e-mail to
inquiry@johnjenkinsdesigns.com
after checking that everything is available,
you will be billed via PAYPAL.
your order will be shipped on confirmation of payment.
worldwide airmail 12%
(minimum postage us$10)